Rumble Resources Limited (ASX: RTR) announced that the assay results of the two RC drillholes fast-tracked at the Chinook Prospect within the Earaheedy Project in Western Australia has confirmed a major Zinc-Lead discovery.

RTR said that the results have highlighted the potential for a very large-scale (Tier 1) Zinc-Lead System as the Chinook Prospect drilling has only tested 2km of the 45km of prospective mineralised strike underlining the potential to delineate multiple large tonnage, shallow (open pit) deposits throughout the Earaheedy Project.

The company has completed the drilling of 33 reverse circulation (RC) holes across the Chinook and Magazine prospects within the Earaheedy Project with the total metreage being 3593m.

Rumble’s Zn-Pb exploration target at the Earaheedy Project is between 40 to 100 million tonnes at a grade ranging between 3.5% Zn-Pb to 4.5% Zn-Pb. The company said that it intends to test the exploration target with drilling and this further drilling is expected to extend over approximately 12 months.

RTR had completed RC drilling at the Earaheedy project with the total metreage being 3593m for 33 holes. This included 26 holes for 2653m at the Chinook prospect and seven holes for 940m at the Magazine prospect.

Drilling at Magazine was designed to test for potential strike vectors associated with mineralisation defined in 2020 by Rumble. EHRC034(2020) previously returned 12m @ 4.48% Zn + Pb from 88m announced 4th May 2020. The company said that the results are pending for all holes of Magazine prospect and are will be received in due course.

Rumble had fast-tracked two drillholes (EHRC050 and EHRC044) at the Chinook prospect for multi-element assays.

The company announced that the 26 drill holes out of 26 in Chinook prospect intersected visual Zn-Pb mineralisation. RTR said that the 2 holes fast tracked (EHRC050 and EHRC044) have been received confirming a Major Zinc-Lead Discovery. The assays for the remaining 24 RC drill holes at Chinook are pending.

RC drill hole EHRC050 assay results are as shown below. 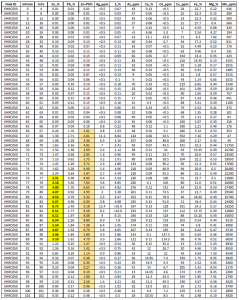 RC drill hole EHRC044 assay results are as shown below. 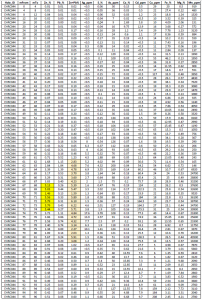 The company noted strong continuity of mineralisation, with EHRC050 and EHRC044 being 500m apart. RTR said that the mineralisation is pyrite-sphalerite-galena (sulphide) hosted in siltstone, shale, marl, and minor sandstone (basal unit of the Frere Iron Formation).

Rumble announced that the Chinook Prospect has the potential to be at the upper end of the existing exploration target for a large-scale, shallow and continuous open-pit deposit. The company noted that the prospective mineralised zone has over 45km of strike.

The company said that further work would include Diamond drilling planned to follow up current RC drill program; and RC drilling programme to extend mineralisation along strike.