Peako preparing to be a major PGE player

This article is a sponsored feature from Mining.com.au partner Peako Limited. It is not financial advice. Talk to a registered financial expert before making investment decisions.

As “critical minerals” increasingly becomes part of the public lexicon, platinum-group elements (PGEs) are the lesser known or talked about minerals playing an important part in creating a greener planet.

PGEs, which consist of platinum (Pt), palladium (Pd), rhodium (Rh), ruthenium (Ru), osmium (Os) and iridium (Ir), are among the rarest metals in the Earth’s crust. They occur together in various types of mineral deposits, typically with variable grades of nickel (Ni), copper (Cu), cobalt (Co), and gold (Au).

While PGEs have historically been dug up from Australian soil, they have typically been by-products extracted by mining companies preferring to concentrate on the nickel and copper often found with the PGEs.

So, when an explorer such as Peako Limited (ASX:PKO) unveils it has near-term scope for a major PGE resource in the East Kimberley region of Western Australia, the opportunity is as unique as it is valuable.

Valuable not only from an investment perspective, but also from the benefits such a project will bring to creating a greener and decarbonised global future.

Among Peako’s value proposition is the Eastman Intrusion. It is a 16.5km long PGE-mineralised layered complex that sits within the Central Zone of the Halls Creek Orogen, where an array of mineralised layered mafic-ultramafic intrusive complexes has been defined with an established mineral endowment. 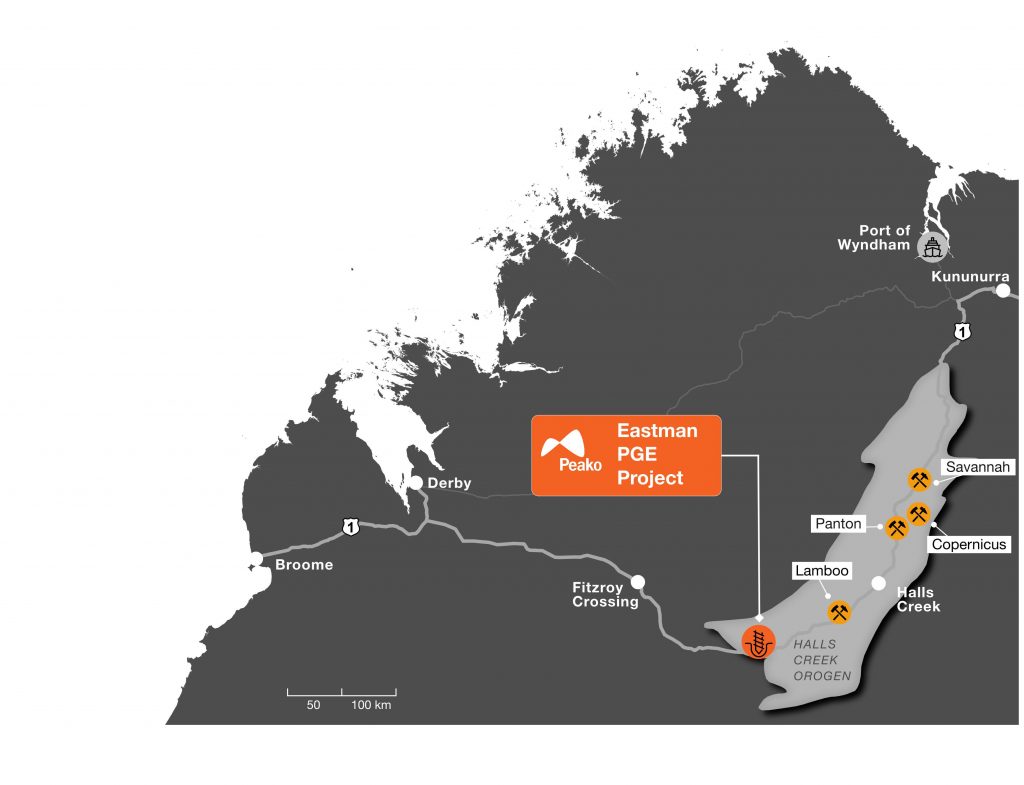 According to Peako Technical Director Dr Paul Kitto, there is strong potential for Peako to identify a PGE resource relatively quickly.

“The Eastman Intrusion extends over more than 16 kilometres but has only received limited historical drilling for thin PGE-rich chromite horizons within a thick mafic/ultramafic package.

It is now understood that the stratabound PGE mineralisation is disseminated throughout the thick mafic/ultramafic packages presenting an exciting target we are testing in the current drill program.”

Historical work at all three intrusions solely focused on the stratiform chromite layers within the mafic and ultramafic rock package.

Realisation that PGE mineralisation was actually disseminated throughout the mafic and ultramafic packages, that is ‘stratabound’, has been successfully tested at both Panton and Lamboo and resulted in much broader mineralisation envelopes up to 100m thick.”

What is most exciting for Peako is that more than 10km of strike of the prospective mafic/ultramafic horizons is completely untested for PGEs.

”The Eastman Intrusion extends over a length of more than 16.5km and is clearly identified in airborne geophysics, however prior explorers focussed mostly on the outcropping eastern-most ~6km of the complex.”

Dr Kitto describes historical drilling as limited and scattered, especially in the west where the intrusion is under ‘shallow cover’.

“The very limited historical drilling demonstrates that the PGE-rich mineralisation extends laterally along the entire length of intrusion.”

That means the potential upside for Peako can be enormous.

Aiming to define a resource relatively quickly, Peako recently started an initial 4,500m reverse circulation (RC) drill program at the Eastman PGE Project in the Kimberley region to find out just how endowed it is.

The program has been designed to drill across the mafic/ultramafic package about every 1000-1,500m to identify the strike potential of the Eastman Intrusion to host economic PGE mineralisation.

Peako has noted that the Eastman Intrusion is already showing signs that the company could have a bankable asset within its portfolio.

“The Eastman Intrusion, like the Panton and Lamboo intrusions, has the potential to host a number of high-grade multi-million-ounce PGE deposits along its 16.5km strike.

Furthermore, as well as the 16.5km strike of the Eastman Intrusion, Peako has also identified a further mafic/ultramafic package to the southeast of the intrusion that has had no prior exploration.

A program of soils and rock chip sampling is now underway to determine the prospectivity of this new area to host further economic PGE mineralisation.

PGEs such as those identified in the Eastman Intrusion have been named as critical minerals and an important part of the move to global decarbonisation.

The Australian Government identifies critical minerals as metals, non-metals, and minerals considered vital for the economic well-being of the world’s major and emerging economies, yet whose supply may be at risk due to geological scarcity, geopolitical issues, trade policy, or other factors.

According to the government’s Australian Critical Minerals Prospectus 2021 released in December, Australia hosts some of the world’s largest resources of critical minerals.

Many are used in low-emission technologies such as electric vehicles (EVs), wind turbines, solar panels, and rechargeable batteries. Others are also crucial for common products such as stainless steel and other household electronics.

The Australian Government’s 2022 Critical Minerals Strategy, released in March, notes that the country is at the centre of meeting the growing demand for critical minerals.

The strategy is designed to underpin Australia’s prosperity and security by improving access to reliable, secure, and resilient supplies of critical minerals such as PGEs.

PGEs might be indispensable to many industrial applications but they are mined in only a few places. What makes them critical minerals is that their availability and accessibility could be disrupted by political, economic, environmental, and social events.

Having a large PGE-enriched layered intrusion in a well-endowed region of Western Australia is putting Peako at the forefront of not only becoming the next PGE player, but also one to help lead creating a greener planet.

It’s one thing to be focused on such an important commodity where there are few players, it’s another to have a resource relatively quickly.

As Peako establishes itself by advancing the Eastman Intrusion, the company’s current works program will soon determine whether its PGE Project in the Kimberley region is made up of enough of the right stuff to help create a greener planet.

It’s critical that such a project does, and by all accounts it’s well on its way.

Peako Limited (ASX:PKO) reports it has launched a 1 for 5 non-renounceable pro-rata entitlement offer to raise additional capital up to about $1.2 million...
Read more