The company had recently commenced an 11-hole diamond drilling program (RKDD035- RKDD045) at the Mawson prospect. LEG said that a total of four further diamond drillholes have been completed (RKDD037, RKDD042, RKDD043, RKDD044), with drilling of RKDD045 in progress.

The company has now reported the results from the DD holes RKDD043 and RKDD044.

The diamond drillhole RKDD043 was completed 200m west of RKDD041 targeting the interpreted south-west extension of the eastern chonolith.  The DD hole RKDD044 was drilled 200m north of RKDD042, off the north-eastern end of the Eastern Aircore Geochemical Anomaly (EAGA), targeting the north-eastern interpreted extension of the eastern chonolith.

The company reported that massive nickel-copper sulphide intercepts were reported in the two DD holes, RKDD043 and RKDD044.

Summary drill log of Ni-Cu mineralisation for RKDD043 is as shown below. 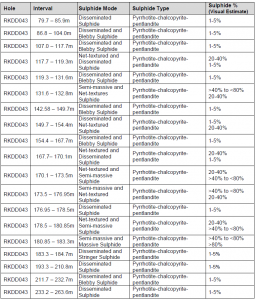 Summary drill log of Ni-Cu mineralisation for RKDD044 is as shown below.

The company said that the step-out diamond drilling across Mawson continues to add weight to existing datasets, with visual intercepts over a 1.2km strike length now adding additional support that a large mineralised system is driving Mawson.

The company noted that the 3D model driving predictive exploration at Mawson continues to be very accurate and bodes well for continued selection of targets to test for the preferred host lithologies and structurally favourable positions to host massive Ni-Cu mineralisation across the Mawson intrusion.

The company announced that DHTEM has been completed on RKDD043 with in-hole and off-hole conductors identified, interpreted to be extensions of the massive and semi-massive Ni-Cu sulphide mineralisation encountered in-hole. LEG said that diamond drilling is planned to test these conductors.

The RKDD043 modelled DHTEM conductor parameters are as shown below.

The company said that the DHTEM is now scheduled for RKDD044.

LEG said that diamond drilling is continuing with two diamond rigs at Mawson across priority areas. The company said that DHTEM will be undertaken on all completed diamond drillholes to assist follow up drilling.

Legend said that the DHTEM contractor GEM Geophysics is currently on site with completed drillholes to undergo surveying as scheduled.

The distance between these holes and the discovery zone, along with the developing story from downhole EM surveys, continue to demonstrate a very large system driving Mawson, which is consistent with the potential of a significant deposit.”