The company said that the Downhole EM is ongoing, identifying multiple targets.

The company had recently commenced diamond drilling at the flagship Mawson nickel-copper-cobalt prospect.

Legend said that the assay results from drillholes RKDD035-RKDD042 were received, returning intervals of low-grade Ni-Cu values in the range 0.05-0.2% Ni associated with disseminated sulphide in mafic/ultramafic intrusive, as expected. The company said that the results from drillholes RKDD043 and RKDD044, which intersected significant Ni-Cu sulphide intervals are expected within the next 2-3 weeks.

LEG has now reported the results of the next nine diamond drillholes (RKDD045-RKDD053). Of these DD holes, RKDD053 was designed to test an offhole conductor from RKDD043, whilst holes RKDD045 – RKDD052 continued the systematic step-out diamond drilling across Mawson, adding critical data to existing datasets.

The RKDD053 summary drill log of Ni-Cu mineralisation is as shown below. 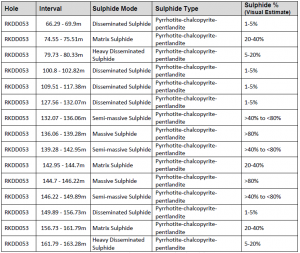 The company said that the downhole transient electromagnetics (DHTEM) is scheduled on RKDD053 to search for further extensions to the mineralisation.

DHTEM was completed on RKDD042 and RKDD044 and identified a large offhole conductor of significant size and thickness adjacent to the interpreted MLTEM stratigraphic conductor D3. LEG said that drillholes have been designed and will be completed east of RKDD044 to better constrain this conductor before drill testing. The company said that the ongoing drilling across Mawson will focus on continued definition of these intrusive bodies and targeting of structural trap sites for massive Ni-Cu sulphide accumulation.

The company said that the diamond drilling is continuing with two diamond rigs at Mawson systematically testing across priority areas. LEG said that the DHTEM is ongoing on all completed diamond drillholes to assist follow up drilling.

Legend said that the integration of DD, RC, aircore geochemical, and geophysical datasets to evolve 3D emplacement model of Mawson, with new constrained gravity and magnetic inversions is ongoing.

Legend Managing Director Mark Wilson said: “We are very pleased to announce a new zone of massive/semi massive nickel copper sulphide around holes 43 and 53. With ongoing downhole EM and further drilling we expect this zone will evolve over time.

Equally pleasing is that our strategy of systematic step out drilling continues to expand the 3D footprint of the mineralised intrusive and open up further prospective horizons for future planned drilling.”