Caprice Resources Limited (ASX: CRS) reported that the Company’s 2020 drilling program at the New Orient prospect within its Island Gold Project in WA has returned very high-grade gold assay results from a new Quartz zone identified at New Orient to the south and west of the previous drilling.

Significant hits included 3m @ 32.96 g/t Au from 129m incl. 1m @ 68.25g/t from 130m. The quartz zone is thought to represent an offset of known mineralisation as it was intersected shallower and further west than anticipated.

Caprice Resources said that it will resume a 4,000m drilling program for its project in February to further extend known gold exploration targets after an initial program started in November. The company said that the Downhole Electro Magnetics program (DHEM) is now complete with the interpretation of anomalies underway.

The company had recently completed its 2020 RC drill program at the New Orient prospect within its Island Gold Project. Caprice said that the drilling in this phase was designed to confirm the plunge and the continuity of the high-grade zones, as well as extending the depth and strike of the deposit.

CRS reported that it has now received the final results from the 2020 drilling program.

The company said that very high-grade gold assay results were returned from a new Quartz zone identified at New Orient to the south and west of the previous drilling. CRS said that BB0056 returned 3m @ 32.96 g/t Au from 129m incl. 1m @ 68.25g/t from 130m. This Quartz zone is thought to represent an offset of known mineralisation as it was intersected shallower and further west than anticipated.

All intercepts >1g/t Au from current results are shown below. 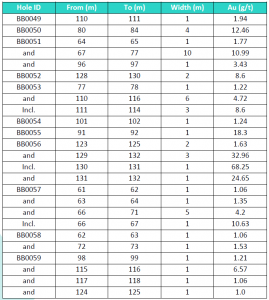 The company reported that the conclusion of the 2020 drill program demonstrated extensions to the high-grade gold mineralisation at depth. CRS said that the drilling confirmed the primary plunge of the mineralisation to be associated with the intersection of the north west trending fault with the north trending BIF.

CRS said that follow up drilling at New Orient is scheduled to commence on the 8th of February and will run in conjunction with the planned campaign at Baxters, Vadrians Hill, and Iron Clad prospects.

The company said that the program will continue to test for extensions to the New Orient mineralisation at depth and along strike.

Caprice announced that it has completed Downhole EM at the prospect to determine extensions to the high sulphide zones and interpretation is underway.

The company said that the result of this survey will assist in drill target prioritisation going forward. DHEM had helped in identifying high-grade pyrrhotite mineralisation at Hill 50 and more recently at Bellevue Gold Mine.