AVZ Minerals Limited (ASX: AVZ) announced that further strong results including 203.3m @ 1.59% Li2O and 1,014ppm Sn were received from the Mineral Resource drilling of its Manono Lithium and Tin Project in the Democratic Republic of Congo.

The company said that the resource drilling at Roche Dure identified further high-grade lithium and tin mineralisation directly beneath the historical pit floor. AVZ said that pit floor mapping and drilling confirmed slightly weathered to fresh pegmatitic rock makes up the pit floor and that it will likely be re-classified under JORC definition.

AVZ noted that the assay results from the first four holes in this drill program were not included in the May 2019 Mineral Resource. The company said that a new resource update is expected, pending all outstanding data being received in the First Quarter 2021.

The company said that it has received strong results from the first four of nine planned diamond drill holes at Roche Dure in previously undrilled areas beneath the historical pit which were inaccessible and under water during the earlier resource drilling programs.

Results from the four holes are as shown below. 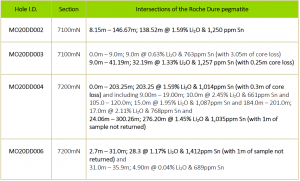 The company said that all holes showed varying amounts of breakage with minor core loss caused by blasting damage from the previous hard rock mining operation at Roche Dure.

The company said that a new resource update is expected, pending all outstanding data being received in the first Quarter 2021. Assay results from the first four holes in this drill program were not included in the May 2019 Mineral Resource.

The potential benefits from confirmation of the “wedge” pit floor material as Indicated Resources under the JORC code will possibly include increased Indicated Resources available for conversion to Probable mineable reserves; potential increase in the discounted cashflow as the previously assigned waste becomes mineable ore; a reduction in payback period as waste becomes a revenue generating ore immediately upon commencement of mining operations; a potential reduction in the ore: waste strip ratio; an increased mine life with lower operating costs; an increased open pit volume; and an increased Life of Mine.

The company said that diamond drill testing of the identified priority targets will be on-going. AVZ said that the drilling of 5 metallurgical test work drill holes has been completed.

AVZ reported that it will collate the data and re-run the models to calculate both geological resources and then mineable reserves to be fed into the optimised feasibility study expected later this year.

AVZ’s Managing Director, Nigel Ferguson, said: “These drilling results, combined with the pit floor mapping, confirm the pit floor “wedge” is in fact made up of pegmatitic rock that historically was mined as tin-bearing feedstock.

This area had previously been categorised as waste material in our current mining and financial model due to a lack of drilling data and under our current model, is pre-stripped as waste before ore can be sent to the processing plant.

These positive drill results unequivocally demonstrate this is not the case and this material may be remodelled with increased confidence as revenue generating ore once all of the assay results are returned.”

The Company is waiting on further assay results, with the targeted drill program soon to be completed with only one hole currently underway.”